What is the Key that Opens the Door of Heaven? 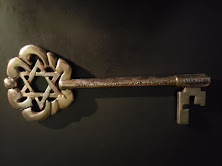 And He says to him, “Truly, truly, I say to all of you, you will see the heaven opened, and the angels of God ascending and descending on the Son of Man.” John 1:51

In 2003 I stepped across the threshold into just such a Presence in Uganda and I said to my companion, “I don’t want to leave here the same way I came.”  A few days later I was able to say, “I will never be the same again.”

For Heaven to be Open there must be a Key The Sovereign Initiative of the Father is the Key that unlocks Heaven.

Jesus answered and said to him, “Blessed are you, Simon Bar-Jonah, for flesh and blood has not revealed this to you, but My Father who is in heaven.” Matthew 16:17

No natural sagacity, study, or discernment had revealed the great truth. None of these had overcome slowness of apprehension, prejudices of education, slackness of faith. No unregenerate mortal man had taught him the gospel mystery. None but the Father could have revealed to him the Son. Pulpit Commentary

Beware less we think we need to stretch out the hand of flesh to steady the Ark of His Presence. “Uzzah put out his hand to the ark of God and took hold of it, for the oxen stumbled. And the anger of the LORD was kindled against Uzzah, and God struck him down there because of his error, and he died there beside the ark of God.” 2 Samuel 6:6b-7

Just a few verses later Simon Peter did just that and got a severe rebuke.  “Get behind me, Satan! You are a hindrance to me. For you are not setting your mind on the things of God, but on the things of man.” Matthew 16:23

This is also proof that he was not chosen because he was choice - he became choice as a result of having been chosen. Human flaws are no hindrance to Sovereign choice. The Bible is full of just such examples.

Human effort and/or disposition cannot raise up the Fallen Booth of David for God says He will raise it up at the Last Days and His people will be drawn into His Presence. “‘After this I will return, and I will rebuild the tent of David that has fallen; I will rebuild its ruins, and I will restore it,” Acts 15:16 Notice how often the pronoun “I” is used in this one verse.

Thus we cannot create an Open Heaven - we can only Celebrate its Openness.  That is what is called True Worship. God doesn’t change, but we most certainly will be!

Until the time that his (Joseph’s) word came to pass, The word of the LORD tested him. Psalm 105:19

Joseph was held firmly by this Sovereign Purpose - there was nothing that could dissuade its culmination.

Everything that happened to Joseph no matter how evil or perverse it may have seemed was the Word of the Lord for Joseph.

Joseph, “But as for you, ye thought evil against me; but God meant it unto good, to bring to pass, as it is this day, to save much people alive.”  Genesis 50:20

What Joseph had to learn was timing.  Fruitfulness and/or giftedness are no indicators of maturity - only timing is.  All self-promotion must thoroughly be purged that which remains will only be to the Glory of God. “so that in all things God may be praised through Jesus Christ. To him be the glory and the power for ever and ever. Amen.” 1 Peter 4:11

As God also did for the nation of Uganda...

Once the nation was known as the Pearl of Africa.  Yet they went through the Refiner’s Fire that they only would know the Pearl of Great Price.

No matter the circumstances we are held firmly in the Grip not only of the One Who knows time - yet is time itself.  “Grace to you and peace from Him who is, and who was, and who is to come,” Revelation 1:4

And this is our confidence.

It was just before the Passover Festival. Jesus knew that the hour had come for him to leave this world and go to the Father. Having loved his own who were in the world, he loved them to the end. John 13:1

He loves His own unto the end!