“At the time of sunrise, a ray grazes the notch on the left side on Christmas Day, the first season of the year, the season of the blessed advent of the savior Lord Christ. Behold he is born of Mary, a woman.”

It was decided to verify the accuracy of the translation by visiting the carving in December. In ancient times, Christmas was celebrated around the Winter Solstice, so a small group met at the petroglyph on the night of December 21, 1982. Quietly they waited as the dawn sun climbed behind them to a height where it spilled over the mountains and streamed its rays toward the cliff face before them.

They watched in amazement as the first shaft of sunlight funneled through a previously unnoticed notch in the cliff overhang, and like a flashlight beam, struck the dead center of a sun symbol at the left end of the panel. Since the sun rises in a slightly different spot each morning, its rays directly hit that sun spot at no other time of the year.

Transfixed, they watched the beam expand as the sun rose, pushing the shadow from left to right, slowly bathing the entire message in sunlight like a prehistoric neon sign announcing yet another Christmas as it had done for centuries.

Before their eyes, they had received a Christmas message across the ages. Here was a message that was definitely Christian, carved in the 6th century and carved in Ogham -- a cipher used at that time only by the Irish!

Shortly after publishing their remarkable find, the investigative team learned of another petroglyph at Horse Creek in nearby Boone County. This one was larger than the first. Dr. Fell called it a sensational find. He believed it to be the world's longest Ogham message and dated it between the 6th and 8th century. This 3-line message, when deciphered, read, A happy season is Christmas, a time of joy and goodwill to all people. The second line read; A virgin was with child; God ordained her to conceive and be fruitful. Behold a miracle. The third line read, She gave birth to a son in a cave. The name of the cave was the Cave of Bethlehem. His foster father gave him the name Jesus, the Christ, Alpha and Omega. Festive season of prayer.

There is a very similar petroglyph in Count Kerry, Ireland.

(I have walked down the railroad tracks at Lynco, Wyoming County, climbed the bank and viewed this indelible testimony for myself along with my buddy Denny Westover. It is interesting to note that according to the 2010 Census the majority ancestry group in Wyoming County are Irish - a Celtic people. Other Celtic peoples in the British Isles are the Scots, Welsh and Cornish. The First Century British Warrior Queen Boudica was also a Celt.)

Posted by Ron Thaxton at 3:53 AM No comments:

The Sacred Call for Men! A Boaz Company... 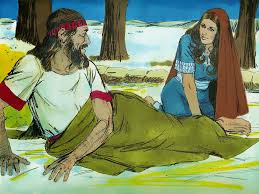 Can we only imagine what it would be like beginning with the first week of January 2021 for the men in our community to commit one day of all 52 weeks to pray and fast for the well-being of our community, city, region and state?

“Therefore I want the men in every place to pray, lifting up holy hands, without wrath and dissension.” 1 Timothy 2:8

It is primarily the men that are responsible for the wrath and dissension in our community.  Therefore, it is incumbent on us to change the direction and see our community healed.

Can we be those of Boaz who will spread out our covering of protection over our Ruth?  (This is what happened Saturday a week ago as a Band of Brothers stretched out our canopy over our sisters of Recovery Point. If you remember the picture, Ruth was standing there surrounded by a Boaz Company.)

Our Ruth will then be released to be all that our Father has intended for her to be. (This insight is from my own Ruth.) That is, her cloak will be full of grain - more than she could ever have gleaned by herself. Ruth is imploring - Boaz stand up!  If we do not take our stand to redeem her, there is another that will....

Will we accept the challenge?  Will we be our Ruth’s Kinsman-Redeemers? Only in this manner will our promised inheritance be guaranteed - that is, our children.

And Naomi became Boaz’ mother-in-law and the Grandmother to the child that would be born and it was said to her that he would be a restorer of life and a sustainer to her in her old age. The indication here is that the family would be whole - providing security.

If you can only imagine - then join with us this Thursday, 8:00AM in the Conference Room of Joe Holland Imports.

This is from no misogynist - but from the husband of one wife, the father of two daughters and the grandfather of three granddaughters - all of whom I love fiercely.

From a World War One Era Song - so pertinent for today!

They were summoned from the hillside

They were called in from the glen,

And the country found them ready

At the stirring call for men.

For no gallant son of freedom

To a tyrant's yoke should bend,

And a noble heart must answer

To the sacred call of "Friend."

{Ruth’s antithesis is Jezebel. There can be no Jezebel without there first being an Ahab.}