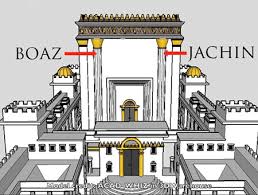 What is the Eternal and Perpetual Significance of Solomon’s Portico and Its Twin Pillars?

There are only two objects in the construction of the First or Solomon’s Temple that received names.  In effect they are anthropomorphic (a non-human object given human characteristics).

“He cast two bronze pillars, each eighteen cubits high and twelve cubits in circumference. He erected the pillars at the portico of the temple. The pillar to the south he named Jakin and the one to the north Boaz.” 1 Kings 7:15, 21

the balance of evidence appears to favour the view that Jachin and Boaz were monuments erected in the porch, to dignify the sanctuary, and to symbolize the power and eternity of the Being to whom it was dedicated P.C. (Pulpit Commentary)

Jakin was a priest - he shall establish - righteousness “Let Your priests be clothed with righteousness, And let Your godly ones sing for joy.” Psalm 132:9

Boaz was a prince - in it (Him) is strength - justice “The strength of the King loves justice;” Psalm 99:4

These two pillars supported the roof of Solomon’s portico - porch.  “Righteousness and justice are the foundation of Your throne; Lovingkindness and truth go before You.” Psalm 89:14

“it was winter, and Jesus was walking in the temple in the portico of Solomon.” John 10:23  It was on the Eastern side of the temple. The warmth and glow of the sun arises in the east as does its herald the Morning Star. “I am the Root and the Offspring of David, and the bright Morning Star." Revelation 22:16

At the hands of the apostles many signs and wonders were taking place among the people; and they were all with one accord in Solomon's portico. Acts 5:12

In the days of Christ and His Apostles all that remained of the First Temple where the Glory of God dwelt was Solomon’s Portico. In the Fulness of Christ the Glory of God once again came to the Temple - to the only part that remained from the First. Yet, now it is no longer confined to the inner sanctuary to beheld by only a few - it is now to beheld by all, even the Gentiles.

The Portico of Solomon led the way into the Court of the Gentiles.  All worshipers must pass between Jakin (righteousness) and Boaz (justice) to enter the Temple Courts.

When Jesus cleansed the Temple it was the Court of the Gentiles that was cleansed.  He passed through Solomon’s Portico to get there.  ‘“The Jews hoped that the Messiah would cleanse the temple of Gentiles, but Jesus cleansed the temple for the Gentiles.” Christ judged the wicked and showed grace to His chosen in the very same act. God always shows mercy in the midst of judgment, but only those who trust in Him receive that grace.’  R.C. Sproul

The roof was supported by the two pillars or columns thus it is often referred to as Solomon’s Colonnade.

While he clung to Peter and John, all the people, utterly astounded, ran together to them in the portico called Solomon’s. And when Peter saw it he addressed the people: “Men of Israel, why do you wonder at this, or why do you stare at us, as though by our own power or piety we have made him walk? The God of Abraham, the God of Isaac, and the God of Jacob, the God of our fathers, glorified his servant Jesus,” Acts 3:11-13

Flavius Josephus writes of it: “the work of king Solomon, who first founded the whole temple.''  The historic writings of Josephus give an eyewitness account to the First and Second Temples, as well as Herod's Temple, all shared the same fore-mentioned east wall of the Temple complex. The east boundary line of the Temple complex never changed. Josephus was clear that Herod refused to let his builders make any changes in the ancient works of the east wall because of the great expense. Herod allowed the construction of new courts on the north, west and south sides of the Temple but the east wall remained intact and undisturbed.

Although it was completely destroyed in 70AD by the Romans (They will not leave one stone on another, because you did not recognize the time of your visitation from God.") the foundation on which the pillars rested remains - longingly.

So then you are no longer strangers and aliens, but you are fellow citizens with the saints, and are of God’s household,  having been built on the foundation of the apostles and prophets, Christ Jesus Himself being the corner stone, Ephesians 2:19 -20

"I also say to you that you are Peter, and upon this rock (foundation stone) I will build My church; and the gates of Hades will not overpower it.” Matthew 16:18

This is where Jesus walks!

The porch of Solomon was no doubt a special place for Jesus. It was here that Jesus was seen often, speaking and teaching the people or just walking, as in John 10 during the festival of "lamps" or chanukkah, which commemorates the re-dedication of the temple and of God to His people. Later, after His death his disciples gathered here often.

All have access!  Just as they did at the tabernacle of David.  The portico was named after David’s son - but it would represent the Presence of great David’s Greater Son.  Solomon’s throne would come down while the Throne of the Messiah would endure forever.  “Behold, the days are coming, declares the LORD, when I will raise up for David a righteous Branch, and he shall reign as king and deal wisely, and shall execute justice and righteousness in the land.”  Jeremiah 23:5

“Clouds and thick darkness surround Him; Righteousness and justice are the foundation of His throne.”  Psalm 97:2

A Spiritual Reality - A Portal

Let the reader understand that I am not talking about rebuilding another physical building for God destroyed the first and successive ones for a reason.  To attempt to do so would be akin to the building of the tower of Babel.  “But I saw no temple in the city, because the Lord God Almighty and the Lamb are its temple.” Revelation 21:22

For Solomon’s Portico was not only a porch - it was a portal.  The Celts would call it a “thin place” or a horizon - where heaven and earth come close.  The only portico that will be re-built is the one built by Christ Himself. “I will build my church...” I believe I heard Him say that it would be His - thus it would go by no other name.

The twin pillars represented an opening - door-way - through which the King of Glory Himself would enter. “Lift up your heads, O gates (opening), And be lifted up, O ancient doors (entrance way), That the King of glory may come in!” Psalm 24:7

As with the rest of the temple it was built true - level and plumb.  “I will make justice the measuring (level) line and righteousness the plumb line;” Isaiah 28:17a NIV

But the LORD of Hosts will be exalted by His justice, and the holy God will show Himself holy in righteousness. Isaiah 5:16

'The latter glory of this house will be greater than the former,' says the LORD of hosts (Heaven’s Armies), 'and in this place I will give peace,' declares the LORD of hosts." Haggai 2:9  Although there is a warfare motif here, the word peace doesn’t just mean the absence of war.  We transliterate it as “shalom” which means welfare, health, prosperity.

These words of the prophet reference the building of the Second Temple under Zerubbabel (prince) and Joshua (priest).  “But the promise is not fulfilled by this; the peace promised to the spiritual temple is that peace of heart and conscience which is given by him who is the Prince of Peace (Isaiah 9:6), and which includes all the graces of the Christian covenant.”  "This house" means the temple at Jerusalem, regard not being paid to the special building, whether of Solomon, or Zerubbabel, or Herod. To us it speaks of the promise of Christ, God incarnate, in the holy city and in the temple itself, and of his presence in the Church, wherein he abides forever. P.C.

The first temple was built by the king (Solomon) whose name is "Peaceful;" the second is glorified by the presence of the "Peace bringer.”  P.C.  "The scepter shall not depart from Judah, Nor the ruler's staff from between his feet, Until Shiloh (Peace-maker) comes, And to him shall be the obedience of the peoples.” Genesis 49:10  Shiloh can also mean “he whose right it is.”

I will establish your royal throne over Israel forever, as I promised David your father when I said, ‘You shall never fail to have a successor on the throne of Israel.’ 1 Kings 9:5

Thus when Shiloh came - He walked in what had prefigured His coming - Solomon’s Portico. “He was in the Temple, walking through the section known as Solomon’s Colonnade.” John 10:23  Whose supporting columns are those of righteousness and justice - priests and kings.  “and has made us kings and priests to His God and Father, to Him be glory and dominion forever and ever. Amen.” Revelation 1:6

Solomon was a type of priest-king for the Queen of Sheba said to him: "Blessed be the LORD your God who delighted in you, setting you on His throne as king for the LORD your God; because your God loved Israel establishing them forever, therefore He made you king over them, to do justice and righteousness."  2 Chronicles 9:8

At the consummation - regeneration - Christ will return through the Portico of Solomon - between Jakin and Boaz. This temple will be a spiritual one - impervious to destruction by the hands of men - eternal in the heavenlies. “But when Christ appeared as a high priest of the good things to come, He entered through the greater and more perfect tabernacle, not made with hands, that is to say, not of this creation;” Hebrews 9:11

Enter His gates with thanksgiving And His courts with praise. Give thanks to Him, bless His name. Psalm 100:4