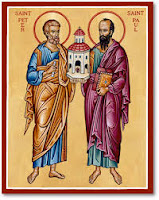 Peter and Paul - the twin foundational pillars of the church. In them justice and righteousness kiss - to the Glory of God!.

They would die together, Peter and Paul, the pillars. This insight is provided by Michael Card - a psalmist/theologian.

This is a painting from a Romanian Orthodox Cathedral of Peter and Paul supporting the church. There they both are, Peter and Paul. And between them they are holding up the church, Christ’s church. (Represented by a building.)

From Michael Card, “We need the passion for correctness that we find in Paul (vertical toward God - righteousness). But we also need the stable bridge of Peter to continue to help us cross over (horizontal toward mankind - justice).” It is at the Cross of Christ that we find these two foundational principles intrinsically bound together.

Paul holds in his hand an elaborate volume (indicating the depth of his knowledge) while Peter only a simple small scroll (which may represent his two epistles).

Paul’s death would be by beheading befitting only to a Roman citizen, Peter would suffer the ignominy of being crucified upside down identifying with all peoples.

Yet, what they did they did together in oneness. Their martyrdom was at about the same time and in Rome under the murderous regime of Nero. Their testimony has become a lasting memorial before God and before men.

Peter was a businessman while Paul was a priest. Together they constitute a royal priesthood as is all the Church of Christ. May we not gravitate toward one or the other, but embrace them both in their fulness.

It is the two working in concert - harmony - that builds up the Body of Christ. 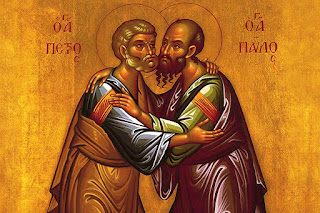